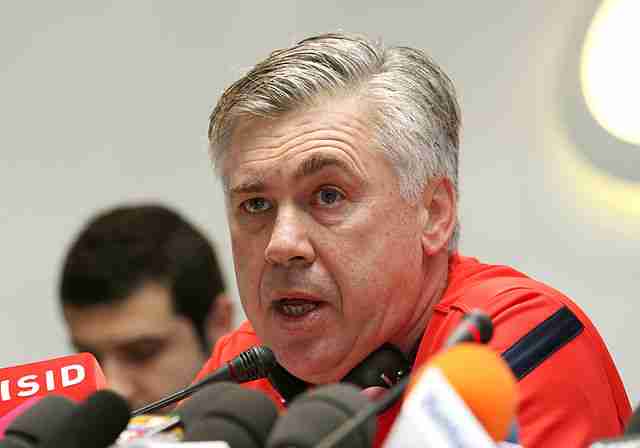 Carlo Ancelotti is the manager of Real Madrid CF, a club in La Liga, the top flight of Spanish club football. He has managed the club since 2021.

He is currently in his second stint as the manager of Real Madrid, something he has never done in his long and illustrious career.

Carlo Ancelotti got into management immediately after he retired from active football 30 years ago in 1992, as the assistant manager for the Italian national team.

He held that role for three years before moving on to his first manager role in 1995, 27 years ago. Here is information on the clubs that Don Carlo, as he is fondly called, has managed to date.

Carlo Ancelotti managed Reggiana for the 1995/96 season after his appointment on July 1, 1995. He ended his tenure on June 30, 1996 after helping the club achieve promotion from the Serie B to the Serie A.

Ancelotti left Reggiana with a respectable record of 17 wins, 14 draws and 10 losses which was enough to help the club earn promotion to the top flight for the first time in years.

Carlo Ancelotti managed Parma from July 1, 1996 to June 30, 1998. He was appointed to fill the big shoes of Nevio Pescala, who had transformed the club into a giant of Italian and European football.

He failed to live up the the standards set by Pescala at the club and was fired after his second season. He finished second with Parma in his first season and sixth in his second season to qualify the team for the UEFA Champions League and the UEFA Cup (Europa League) respectively.

Before leaving the role, Carlo Ancelotti managed the team for 87 matches, winning 42, drawing 27 and losing 18.

Carlo Ancelotti was hired by Juventus on February 7, 1999 after almost one year without a job. He went on to manage the club until June 30, 2001.

He replaced the legendary Marcelo Lippi as the manager of the club after Lippi moved to Internazionale that season. He won his first ever title as a manager at the club but it was a rough spell for him. He was fired at half-time on the last day of the 2000/01 season.

Ancelotti managed the club for 114 matches, winning 63, drawing 33 and losing 18. He won the UEFA Intertoto Cup in his time at the club.

Carlo Ancelotti managed AC Milan from November 7, 2001 to May 31, 2009. It is the longest time he has spent at a club as manager to date. It is also his most successful as he dominated Italy and Europe in that time, drawing from the experiences of his last failures.

By the end of his time at the club, he had won four trophies, broken a number of records, and set up Milan to be the team to beat in Europe and Italy, à la Ariggo Sacchi, under whom he played at Milan and worked with as an assistant manager in the Italian national team.

Ancelotti took charge of Milan for 420 matches, winning 239, drawing 98 and losing 83. He won the Serie A, the Coppa Italia, the Supercoppa Italiana, the UEFA Champions League, the UEFA Super Cup and the FIFA World Club Cup in his time at the club.

He led the club to their first ever double and also led them to become the first club in England to score 100 goals or more in a top flight league season since Tottenham Hotspur in the 1960s.

However, he was dismissed – in true Chelsea fashion – after failing to maintain the high standards he set the previous season despite coming second in the league and becoming the manager with the third highest win percentage in the league at the time.

Ancelotti managed the team for 109 matches, winning 68, drawing 17 and losing 24. He won the Premier League, the FA Cup and the FA Community Shield.

He helped the club back into the Champions League at that time and went on to manage a very good season for the club in his first full season. He resigned from his role after that to move to Real Madrid.

Carlo Ancelotti is in his second stint as Real Madrid manager. He took the role on June 1, 2021 and resumed on July 1, 2021. His tenure is expected to last until 2024 and he has suggested that he could retire from management after his contract is up.

His first stint as Real Madrid’s manager was from July 1, 2013 to May 25, 2015. It was a memorable time for the club, as he led the team to their tenth Champions League title and their first in over a decade.

He was dismissed from the role in the following season after crashing out of the Champions League and ending the season trophyless. He took a year off from management for health reasons after the dismissal.

His succeeded his former assistant, Zinedine Zidane, in 2021 after the Frenchman resigned for the same reasons that he (Ancelotti) was dismissed in his first time out with Real Madrid. He finally got his hands on the La Liga title at the end of the 2021/22 season and also became the first manager to win the Champions League four times.

Carlo Ancelotti managed Bayern Munich from July 1, 2016 to September 27, 2017. It was not a rosy return to management for Don Carlo despite winning two trophies at the club.

It was eventually revealed by Uli Hoeness, the club’s president at the time, that the club’s senior players wanted him out as they did not enjoy his brand of football.

Ancelotti managed Bayern for 60 matches, winning 43, drawing eight and losing nine. He won the Bundesliga and the DFL-Supercup.

Carlo Ancelotti managed Everton from December 22, 2019 until June 30, 2021. In the second half of the 2019/20 season, he was only able to guide the club to finish in twelfth place, the lowest he had ever finished in his career as a manager.

He did better in his first full season by leading the club to a tenth place finish, before resigning to return to Real Madrid. He managed Everton for 67 matches, winning 31, losing 14 and drawing 22.

During his career, Carlo Ancelotti has won 23 trophies. He is one of a kind as he is one of a few coaches to have managed in the top five leagues of European club football and won a league title in all of them. Here is a breakdown of the trophies he has won in his career.