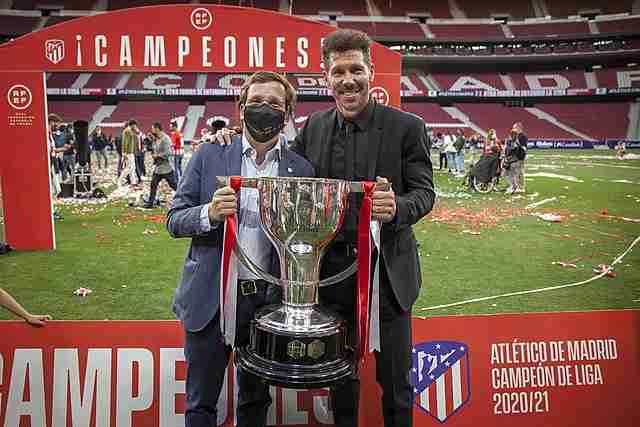 Diego Pablo Simeone González, known professionally as Diego Simeone and fondly referred to as Cholo, is the manager of Club Atlético de Madrid, a club in La Liga, the top flight of Spanish club football.

Diego Simeone got into management immediately after he retired from active football in 2006. He is a very energetic figure who likes to set up his teams to focus on defence.

His 16-year managerial career has been largely successful playing in this way, even though he gets criticized a lot for his ultra-defensive tactics.

Here is information on the clubs that Simeone has managed to date.

He was appointed to the role for the first time, a day after his retirement from active football. He replaced the man who managed him and his former teammates in the 2005/06 Argentine League season and helped stabilize the club before leaving in May.

He returned in July 2011 after Racing Club’s manager resigned, but did not stay long in the role, leaving in December 2011 for Atléti. In those two stints, Simeone managed Racing Club for a combined 33 matches, winning 12, drawing 13 and losing 8 of them.

Diego Simeone managed Estudiantes between May 18, 2006 and December 31, 2007. He took up the role after his first stint at Racing Club.

His first in the role was a year of great success for his new managerial career, as he was voted the best manager in Argentina after leading the club to their second league title in 23 years. He could not keep it up the following year though.

Before leaving the role, Diego Simeone managed the team for 61 matches, winning 34, drawing 15 and losing 12. He won the Argentine Primera División Torneo Apertura in his time at the club.

His tenure at the club started on a poor note but he ended up turning it around and winning the league title with the club. Things soon reverted to the way they were when he was first appointed, and he resigned in November 2008.

Simeone managed the club for 45 matches. He won 20, drew 13 and lost 12. He won the Argentine Primera División Torneo Clausura in his time at the club.

Diego Simeone managed San Lorenzo from April 20, 2009 to April 3, 2010 after a few months without a job. However, not much changed from his last job as he found it difficult to grind out results.

He lost almost as many matches as he won in his time as the manager of San Lorenzo, and eventually had to resign as the criticism mounted. Simeone took charge of San Lorenzo for 49 matches, winning 22, drawing nine and losing 18.

Diego Simeone managed Catania between January 19 and June 30, 2011. He was appointed as Marco Giampaolo’s replacement after the Italian’s poor returns in the first half of the season.

The break from management between his resignation from his last job in April 2010 and January when he was appointed as Catania’s manager helped Simeone. He was able to right a lot of the previous manager’s mistakes and helped them to safety in the Italian Serie A.

Simeone managed the team for the remaining 18 matches of that season, winning seven, drawing three and losing eight.

Diego Simeone has managed Atlético Madrid since December 23, 2011, when he replaced Gregorio Manzano whose poor run of results put the club in a sticky situation.

His appointment was met with approval from fans of the club because he had had a successful career as a player for the club. He eventually helped the club to a fifth place finish but also led the team to Europa League victory.

His first full season, the 2012/13 season, was also a success compared to the last decade of the club. He helped them finish in third place, which was their best ever La Liga finish in 13 years at the time. He also won the Copa del Rey against Atléti’s city rivals Real Madrid in their own stadium, the Santiago Bernabeu.

He had become a fan favourite by the 2013/14 season and he rewarded their support with a league title win. The manner in which he won the titles however, was more impressive than the win itself. The 2013/14 season ended up being the most successful season in the history of the club.

He has since gone on to win a few more trophies and has appeared at a few more finals with the club, including the UEFA Champions League final. He lost both finals to Real Madrid. He is currently expected to end his time at Atlético in 2024. Simeone has managed the team for 581 matches so far. He has won 342, drawn 135 and lost 104 of those matches. He has won La Liga, Copa del Rey, Supercopa de España, the UEFA Europa League and the UEFA Super Cup in this time.

During his career, Diego Simeone has won 10 trophies. Here is a breakdown of the trophies he has won in his career.