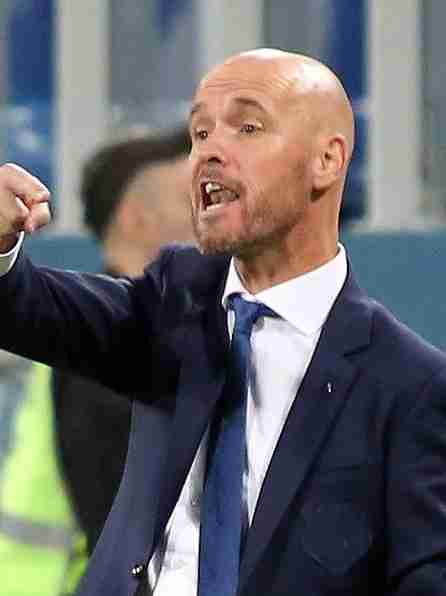 Erik ten Hag is the manager of Manchester United FC, a club in the Premier League, the first tier of English club football. He has managed the club since July 2022 until the time of writing.

Before moving to Manchester United, he managed Go Ahead Eagles, FC Utrecht and AFC Ajax all in The Netherlands; and FC Bayern Munich II in Germany.

He was an accomplished centre back in his playing days, which he spent at various clubs in The Netherlands. After retiring at FC Twente in 2002, he stayed on to become a youth coach and eventually, an assistant manager for the first team.

It was there he honed his skills and took his coaching classes to earn a coaching licence. In 2009, he moved to PSV Eindhoven as an assistant manager with Fred Rutten, who gave him his first taste of senior team management. Soon after, he got his first senior team role and has progressed nicely in his career.

Erik ten Hag is a disciple of Pep Guardiola. His playing style is similar to the Manchester City manager’s, with a few unique twists – notably his preference for a double pivot midfield system.

Erik ten Hag has been a manager for 10 years and counting; 20 years if you include his time as a youth team manager at Twente and as an assistant to Fred Rutten at both Twente and PSV Eindhoven.

As a manager, he has made a reputation for himself as a builder. He is able to tear teams apart and build from scratch, or even take over a struggling club and build it from scratch with shrewd transfer business and youth players from the club’s academy.

Here is information on the clubs he has managed in senior level to date.

Erik ten Hag was the manager of the Dutch club Go Ahead Eagles from July 1, 2012 to June 30, 2013. Marc Overmars, one of Dutch football’s finest players, influenced his appointment to the role after becoming a member of the club’s supervisory board and the man in charge of technical affairs at the club.

Overmars believed ten Hag was ripe enough for first team management after going through different manager profiles and brought him in to Go Ahead Eagles, who were playing in the Eerste Divisie – the second tier of Dutch football – at the time.

Overmars was right on the money with his appointment as ten Hag led the club back to the Eredivisie in his one-year stint as their manager, getting them to the promotion playoffs and winning it. It was Go Ahead Eagles’ first promotion in 17 years. To achieve this feat, he made sure to pay much attention to detail. He is credited as being the catalyst for the revival of the team, who now play in the Eredivisie.

Erik ten Hag managed Go Ahead Eagles for 39 matches and left with a record of 19 wins, 10 draws and 10 losses.

He spent a lot of time with Guardiola, planning out tactics for both Bayern’s first team and his under-19 team. Both managers implemented a similar pattern of play in their teams, that it was almost indistinguishable at some points. He was also very involved in raising the level of the players to prepare them for senior football.

In the two years he spent at the club, he managed Bayern Munich II for 72 matches and left with a record of 48 wins, 10 draws and 14 losses. He won the Regionalliga Bayern, the regional league of Bavaria in the fourth tier of German football. This was Erik ten Hag’s first ever title as a manager.

Erik ten Hag was in charge of FC Utrecht from July 1, 2015 until December 27, 2017. He was made the sporting director and manager of the club, which meant that he was solely in charge of making signings for his team.

Just like he did at Go Ahead Eagles and at Bayern Munich II, he rebuilt the team from scratch by improving the players and facilities available. Utrecht went from a team struggling in the bottom eight of the Eredivisie to a team that comfortably made top 10 due to his impact.

In the middle of his second season at the club, he left for Ajax after they signed a deal with Utrecht to take him. Before leaving, he managed the club for 111 matches, winning 56, drawing 25 and losing 30.

He replaced Marcel Kelzer who was sacked midway into the 2017/18 season after a run of poor results. He helped them to finish second and consolidated on that result by clinching the Eredivisie title in the 2018/19 season. That was after he led Ajax to the semi-finals of the UEFA Champions League, giving the club their first appearance in that stage of the competition since 1996. It remains his most famous achievement to date.