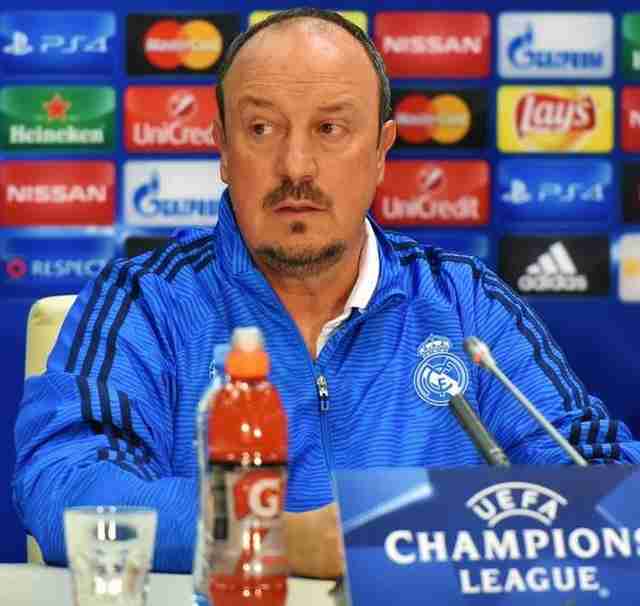 Rafael Benítez Maudes, professionally known as Rafael Benítez, is a professional football manager who most recently managed Everton FC, a club in the Premier League, the top flight of English club football.

He also managed Chelsea FC, a club in the top flight of English club football, on an interim basis in the 2012/13 season.

Rafael Benítez retired from active football early due to injury problems and joined Real Madrid’s coaching staff in 1986, at 26 years old. In a nine-year spell, he would go on to manage a number of youth sides and Real Madrid Castilla, the club’s B-team, before leaving to start his first team managerial career.

He has been a coach for 36 years and a first team manager for 27 years. He has enjoyed very famous successes and very famous failures in that long spell. Here is information on the first team career of Rafael Benítez.

Rafael Benítez managed Osasuna from July 1, 1996 to November 4, 1996. He was dismissed after managing only one win from nine games.

Rafael Benítez was the manager of Extremadura from July 1, 1997 to June 30, 1997. He was fairly successful at the club, leading them from the Segunda Division – Spanish club football’s second tier – to La Liga in his first season.

He only lasted one season in La Liga with the club as they were relegated to the Segunda Division in 1999. He quit after the season ended to study for one year before returning to management.

Rafael Benítez was the manager of Tenerife between July 1, 2000 and June 30, 2001. In his one season at the club, he led them from the Segunda Division to La Liga.

Rafael Benítez managed Valencia from July 1, 2001 to June 30, 2004. He was appointed as the fourth choice option from among a pool of managers and the appointment turned out to be right on the money.

In his three seasons at the club, he won three trophies, one of which was their first La Liga title in 31 years. However, differences with the club’s sporting/football director over signings to be made led to him resigning from his role.

Benítez managed the club for 158 matches, winning 88, drawing 38 and losing 32. He won La Liga and the UEFA Cup (Europa League).

Rafael Benítez managed Liverpool from July 1, 2004 to June 30, 2010. He was the first Spanish national to take charge of a Premier League side. He won the club over by first managing to convince club legend Steven Gerrard not to sign for Chelsea, before going on to win a number of trophies with Gerrard as his captain.

It was in his time as manager of the club that one of the moments of the Champions League, the Miracle of Istanbul, happened. Liverpool were three goals down to AC Milan at half time in the 2004/05 Champions League final but came back to equalize, send the game to penalties, and win 3 – 2 in the shootout.

The club was sold to new owners who did not get along with Benítez, which led to lots of issues off-field. On the pitch, his performances slightly dropped but he managed to reach another Champions League final before leaving in 2010.

Rafael Benítez managed Inter Milan from July 1, 2010 to December 23, 2010. He had big shoes to fill after José Mourinho, who led the club to a treble in the previous season, left the club for Real Madrid.

However, poor performances in the Serie A led to him being dismissed by the club despite winning two titles in his six-month spell in charge of the club.

Rafael Benítez managed the club for 25 matches, winning 12, drawing six and losing seven. He won the Supercoppa Italiana and the FIFA Club World Cup in his time at the club.

Rafael Benítez managed Chelsea from November 22, 2012 to June 30, 2013. He was appointed after the club dismissed Roberto Di Matteo to lead the club on an interim basis while they prepared for the next season. He had a rocky relationship with the club’s fans due to his association with Liverpool but managed to lead them to a top four finish in the Premier League which guaranteed them Champions League football for the following season.

He also won the UEFA Europa League with them, making them the first English team to win all major European titles. This changed the fans’ perception of him as he was appreciated on the last day of his tenure as the club’s interim manager.

He managed the team for 48 matches, winning 28, drawing 10 and losing 10. He won the UEFA Europa League with the club.

He managed the team for 112 matches, winning 61, drawing 26 and losing 25. He won the Coppa Italia and Supercoppa Italiana with the club.

Rafael Benítez managed Real Madrid’s first team, the club where he began his managerial career, from July 1, 2015 to January 4, 2016.

The club terminated his contract with reports citing unpopularity with supporters and the club’s senior players, as well as inability to get good results against top sides.

He managed the team for 25 matches, winning 17, drawing five and losing three.

Rafael Benítez managed Newcastle United from March 11, 2016 to June 39, 2019. He was appointed to help them stave off relegation but he was unable to do so, despite a good run of form towards the end of the 2016/17 season.

He remained with the club in their EFL Championship season and led them back to the Premier League on the first time of asking by winning the league title.

He managed the team for 146 matches, winning 62, drawing 30 and losing 54. He won the EFL Championship with the club.

During his career, Rafael Benítez has won 13 trophies. Here is a breakdown of the trophies he has won in his career.