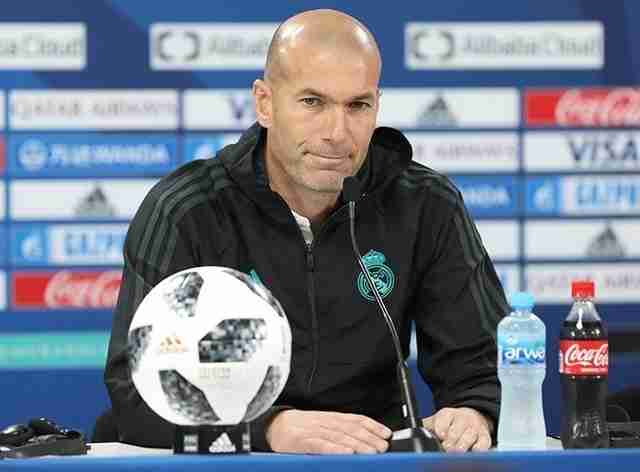 Zinedine Yazid Zidane, fondly referred to as Zizou, was a manager of Real Madrid CF. It is the only team he has ever managed in his managerial career.

Zidane’s affiliation with Real Madrid began when the club made him the most expensive player in the world in 2001 by paying a whopping €77.5 million to Juventus for his signature. He dazzled fans at the Santiago Bernabeu Stadium for five years between 2001 and 2006, before retiring.

He returned in 2009 as club president Florentino Perez’s right hand man. In 2010, José Mourinho, who was the coach of the first team at the time, appealed to Real Madrid’s hierarchy to allow Zidane get more involved with the first team, as he believed that the legend’s aura would do well for the team.

In 2011, he was appointed as the club’s sporting director which gave him even more power to influence the first team and how they played. This was the beginning of his journey into football management. Zinedine Zidane has been a manager for eight years; nine if you count his time as an assistant manager to Carlo Ancelotti in his first stint as Real Madrid’s manager.

The time he spent with Carlo Ancelotti shaped him into the kind of manager he is today. In that time, he contributed to the team’s success in the 2013/14 UEFA Champions League, which was their tenth title in the competition. Dubbed “La Decima“, it remains one of Real Madrid’s most memorable wins in the competition to date.

In total, he managed the team for 263 matches, winning 174 matches, drawing 53 and losing 36. Currently without a job due to a sabbatical leave from management, he is being touted as the next manager of the France national team.

Here is information on his time at Real Madrid.

Zinedine Zidane was the manager of Real Madrid Castilla, Real Madrid’s B-team, from August 26, 2014 to January 4, 2016. He was appointed in June 2014 but some controversy surrounding his appointment led to the start date of his tenure being documented as August 2014.

He left the role in January 2016 to replace Rafael Benitez as the manager of the first team. Before leaving, he was in charge of the team for 38 matches, winning 16, drawing 10 and losing 12 of them.

Zinedine Zidane resumed as the manager of Real Madrid’s first team on January 4, 2016 after a poor run with Rafael Benitez as the manager.

In that season, he made a big splash by ending Barcelona’s Spanish record 39-match unbeaten run in the El Clasico, before going on to win “La Undecima“, the club’s 11th Champions League title, via a famous penalty shootout against city rivals Atlético de Madrid which ended 5 – 3.

Zinedine Zidane’s first full season as Real Madrid’s manager was the 2016/17 season. He started it by winning the UEFA Super Cup against Sevilla and going on an unbeaten run. He also broke Barcelona’s Spanish record 39-match unbeaten run in this season, but in typical El Clasico fashion, Barcelona ended their run, leaving Madrid at 40 unbeaten games.

The 2016/17 was an iconic season for Madrid as Zidane led them to a La Liga for the first time in five years as well as a successful title defence in the Champions League. Madrid were the first team to ever achieve this feat, and Zidane, the first and only manager to date.

Zidane managed Madrid for 60 matches that season. He won 44, drew 11 and lost 5. Along with the UEFA Super Cup, Zidane won the FIFA Club World Cup and the UEFA Champions League that season.

Zinedine Zidane started the 2017/18 season on a wonderful note for Real Madrid fans by ending Barcelona’s 24 consecutive match scoring record in the El Clasico when he led the team to defeat their rivals 2 – 0 in the second leg of the Supercopa de España.

On a personal note, he won the award for The Best Men’s Coach at the 2017 FIFA The Best awards. He also became the third manager in history to win the European Cup (Champions League) three times. However, he fell short in the league as Madrid finished third.

This led to his resignation from the role as he felt he had given everything he could and that the club needed fresh ideas to move forward.

Zidane took charge of Real Madrid for 62 matches, winning 39, drawing 14 and losing nine. He won the UEFA Super Cup, the FIFA Club World Cup alongside the Supercopa de España and the UEFA Champions League that season.

Zinedine Zidane returned to the club on March 11, 2019 after his two successors failed to make any impact. He managed to stabilize the team and helped them to a third place finish in La Liga.

Zidane managed the team for the remaining 11 matches of that season, winning five, drawing two and losing four.

Despite the coronavirus pandemic forcing the world to take a break, there was not much difference during the restart as Real Madrid under Zidane stormed to multiple wins to clinch important titles and records.

Zidane managed the team for 51 matches in that season. He won 33, drew 11 and lost seven of those matches. He won the Supercopa de España and La Liga that season.

Zinedine Zidane had his most underwhelming season as a manager in the 2020/21 season. He managed to finish second in La Liga, however, after which he stepped down as manager.

Zidane managed the team for 52 matches in that season. He won 31, drew 12 and lost nine of those matches. It was the first trophyless full season of his career.